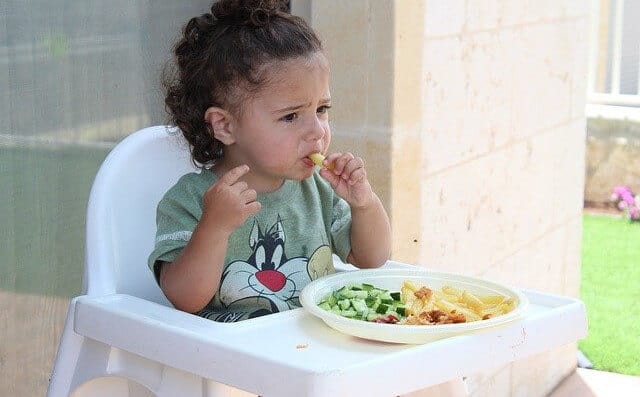 Hello Mamas (and Papas), I just want to share with you 8 tips on how to get your kids to eat more vegetables.

I know as parents, we want our kids to eat healthy as much as possible.

This means they have to eat more fruits and vegetables but obviously, this is easier said than done especially with vegetables!

But don’t worry, there are tips that we can use to help get our kids to eat more veggies.

Our kids will be eating their veggies in no time with these tips. 🙂

The 8 tips to get your kids to eat more vegetables are starting them in the womb, modeling to them, telling them positive stories of what vegetables can do, sneaking the veggies into their favorite dishes, and treating them with a surprise dessert. You can also let them watch their favorite video, get angry, or just let it go and try again the following day.

So, when I got pregnant with #1 and #2, I made sure that I was eating a lot of fruits and vegetables (I don’t have a problem eating them though).

And I think that there’s some truth to it because both my kids love eating fruits and vegetables. We don’t have a problem getting them to eat vegetables, except on days that they’re not in the mood to eat or are grumpy.

When I was pregnant with both, I continue to eat spicy foods even though I have read some articles saying that pregnant women should avoid spicy foods. And surprisingly, both kids eat foods even if they’re a bit spicy without complaining.

When #1 was about a year old, we had soup for dinner. But I put too much pepper into it that my husband was complaining it was spicy. I was waiting for #1 to cry or show dislike, but he didn’t. He was happily opening his mouth everytime the spoon gets closer to his mouth. 🙂

Another time, we were having chicken and broccoli for dinner. I can never forget my husband’s amazement when #1 reached for the broccoli first instead of chicken. He looked at me and said he never did it as a child!

If you are planning to get pregnant soon, make sure to eat more fruits and vegetables.

If you didn’t eat a lot of fruits and veggies while pregnant and you have difficulty getting your kid/kids to eat veggies, don’t worry Mamas, there are still other ways to get them to eat their veggies.

You can’t force your kids to eat veggies if you don’t eat them yourself.  You have to be their role model.

My husband is not a veggie eater. He eats veggies, but only those he likes. The veggies he doesn’t like, he says “yuck or I don’t like this” upfront.

But while I was still pregnant with #1, I was already briefing him: that he should never show that he doesn’t like the veggies in front of our kids.

He agreed while laughing and saying that he will say like “woww, how delicious while eating the veggies”. hahaha.

True to his words, even if I make dishes with veggies that he doesn’t like eating, without complaining he eats them happily on the table.

Then, leaving a good portion on his plate untouched with an excuse that he is not very hungry or that I put a lot into his plate. hahaha.

3. Tell positive stories of what vegetables can do.

My husband is a very good storyteller and he uses it well to let #1 eat veggies, especially on days when he is grumpy.

#1 is crazy about cars, trucks, and tractors. On days that he doesn’t want to eat vegetables, my husband starts telling him that he has to eat his vegetables so he grows fast and tall.

And when he is as tall as Pappi, he will be allowed to drive the car. Then #1 is already happily asking if he can drive his grandfather’s tractor, too.

And my husband says yes, and says that he can even drive the police car, the ambulance, the neighbor’s car, etc. And before we know it, #1 has already eaten everything on his plate.

Now that #1 is 3 years old, he likes to do everything that my husband does. He said he wants to be a beekeeper and programmer like Pappi.

So, when he refuses to eat his veggies, we are quick to say that he has to eat his food, so he grows fast so he can then work with the bees and with the computer.

It’s such an effective technique! Try it at home, if you haven’t yet.

4. Sneak the veggies into their favorite dishes.

This is also a very fun technique! It gives me satisfaction when I see my husband and kid eat the dish I prepare without them even knowing that it has the veggies that they’re not very fun of.

This doesn’t apply to #2 because at the moment, he eats everything I give him. Hopefully, he’ll continue eating that way even when he gets older.

Even if they realize that it has the veggies they don’t like, they will continue eating without complaining if the food is delicious.

My husband likes lasagna, but is not a fan of spinach. But one day, I made lasagna with spinach in the instant pot.

He asked if the greens were spinach, I said yes, but he kept on eating without complaining.:) It’s because the lasagna was very delicious, he even said that the recipe should be for keeps.

Then another time, I made a spaghetti that I loaded with mushrooms (#1 not a fan) and carrots (husband, not a huge fan of).

At the end of the meal, I said that I put carrots and mushrooms and my husband said, he didn’t realize. He thought it was just pure meat.

The trick: I shredded the carrots so they would blend in with the meat and cut the mushrooms into smaller pieces.

5. Treat them to a surprise dessert.

When #1 is not in the mood to eat his veggies, we tell him that there’s a surprise dessert after he eats all veggies.

He then gets excited and asks what the surprise is and we say that he can find out after eating all his veggies.

Then we open the refrigerator and take a look at the desserts available and he gets to choose which one he likes best.

That’s why I like making homemade desserts to make sure that #1 is going to have a healthier dessert.

Though we constantly have store-bought natillas, petit suisse, and gelatina because the husband keeps on buying them no matter how I tell him to stop buying them.

But if the homemade version of those desserts is in the fridge, #1 always prefers them to the store-bought versions. My homemade petit suisse and homemade natillas are hits in our home.

6. Let them watch their favorite video.

Maybe there are several moms who will frown over this tip. But I’ll be a hypocrite if I’m not going to include this because this tip is legit! It works ALL THE TIME in our home!

But when both kids are grumpy and not even in the mood to open their mouths and my husband is so tired from work and says that he doesn’t have the energy for negotiations, I already know what to do.

I take the tablet and put a cocomelon video and suddenly they’re in the mood to eat.

We refrain from using this tip as much as possible, but this is one of our last cards!

Though I know that too much screen time is not good for kids, I prefer that our kids eat their veggies and entire meal while having a bit of screen time than not eating at all.

This is a tip that we try to use less often as much as possible. This tip is very effective though. They eat their veggies, but with tears in their eyes and you end up heartbroken in the end. So, use this as a last resort Mamas and Papas.

And with the #6 tip being so effective, so thankfully we don’t have to use this anymore. Only on days that they still refuse to eat even when the video is playing (which is very seldom, though).

8. Just let it go and try again the following day.

This is the best tip to do instead of #7. If the kids don’t eat their veggies one or two days in the entire week, it’s definitely ok to just let it go and try the following day.

It’s not the end of the world and skipping veggies for a day or two will definitely not harm them. As my husband says: we don’t have to be the first in class!

According to VeryWellFamily, the recommended daily servings of vegetables for kids aged 2-3 years is 1 to 1 1/2 cups.

Are your kids eating this amount? I think our kids are eating at least 1 cup of veggies most of the time. So, I have to use one of the tips more often to make them eat more veggies.

What are the tricks you use at home to ensure that your kids are eating their veggies? Please feel free to share them in the comment section below.