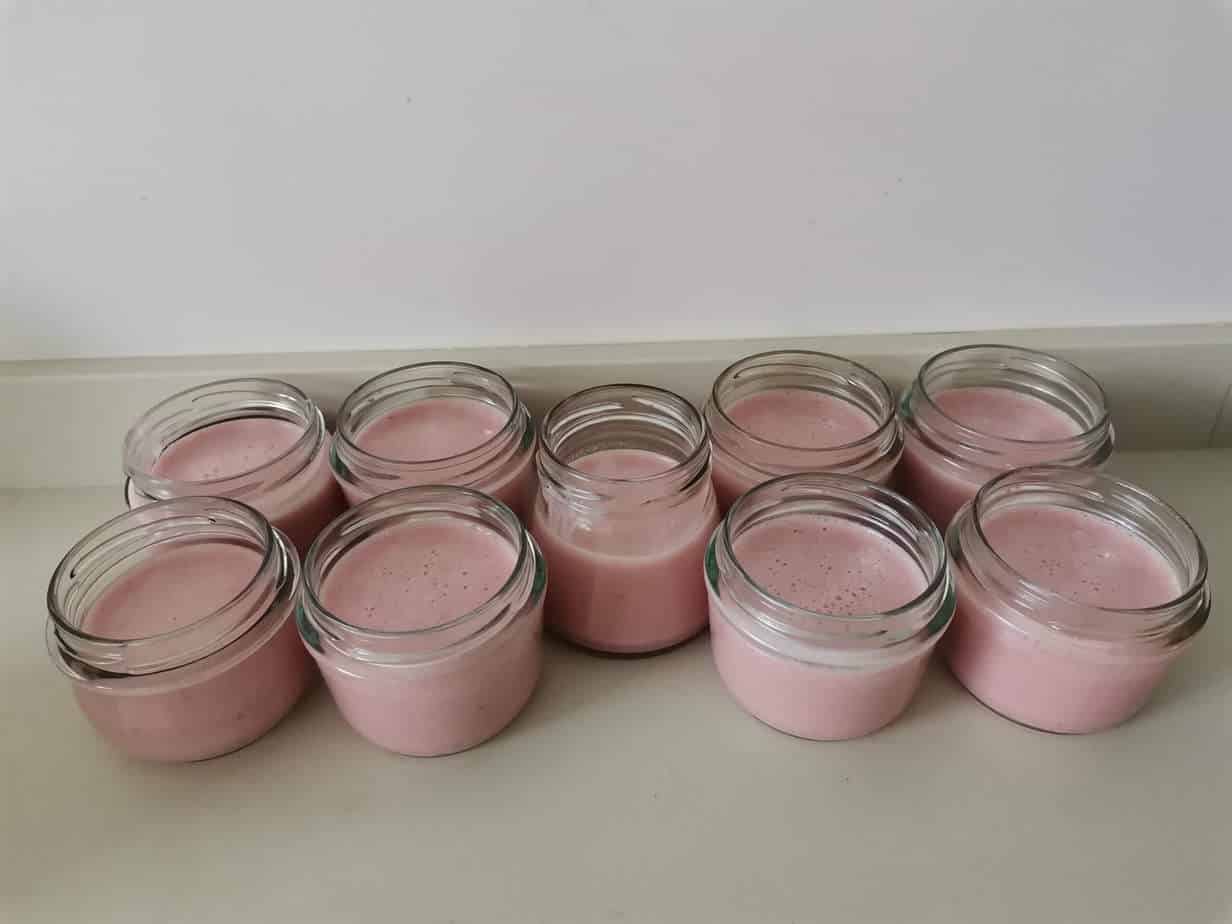 Excited to share with you a super easy homemade petit suisse recipe! This is super easy to make at home as a healthy petit suisse strawberry substitute for the store-bought ones.

We call it mama suisse at home because my husband came up with the idea since it’s made by mama.:)

I started making it in February and made it several times now with different flavors because my boys are crazy about it.

Petit suisse is one of the common desserts sold here in Spain. It’s made of fresh cheese with fruit flavor (strawberry is the most common) and it’s of French origin.

This homemade petit suisse recipe is based on the recipe of Fit Happy Sisters (Spanish bloggers/vloggers). Their recipe is the easiest to follow among all the videos I watched before I finally made it for the first time.

I made my own version of it by using our own raw honey instead of sugar, and homemade yogurt instead of cream cheese. 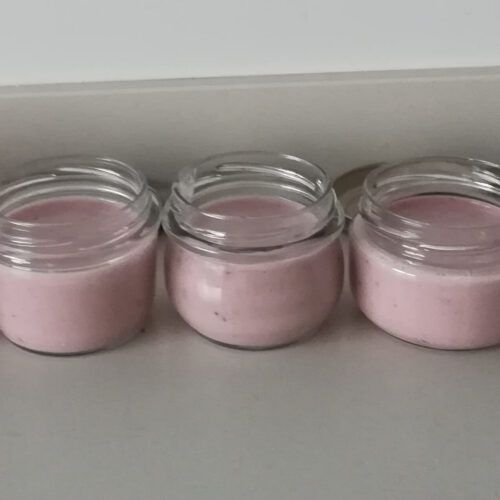 1. Make a strawberry puree. Put the strawberry in a saucepan or pot, add the honey and water, and let the mixture simmer in low fire for about 10-15 minutes. The mixture is ready when it’s already a bit sticky. 2. Meanwhile, dehydrate the gelatin sheets pieces of gelatin in a bowl with cold water and set them aside. 3. In the middle of the strawberries’ cook time, remove it from heat and run the stick blender to covert it into a puree. Continue to simmer until the desired consistency is reached. 3. Mix the yogurt and whole milk in another bowl and mix thoroughly. Use a whisk for better mixing. 4. When the strawberry puree is ready, add the dehydrated gelatin into the hot mixture and mix it thoroughly, making sure that the gelatin is completely dissolved. Make sure to squeeze the gelatin nicely, to remove as much water. 5. Add the puree to the yogurt and milk mixture. Stir thoroughly to combine everything. Taste to make sure the mixture has the desired sweetness. You can add more honey for additional sweetness (I already adjusted this to have less sugar compared to the original recipe). 6. Transfer the mixture to individual small jars or any container of choice. 7. Leave them on the counter for about 5 minutes before transferring them to the refrigerator. 8. They are best eaten the following day to make sure that the mixture has already solidified. Though in our household, my boys eat them even if they’re still liquidy because they can’t wait to eat them until the next day.

What Is Petit Suisse?

Petit suisse is a fresh cheese, an unripened, unsalted, smooth, and creamy cheese with a texture closer to a very thick yogurt than a typical cheese, according to Wikipedia.

It is made from cow’s milk and contains about 40% fat. Petit suisse may be consumed with sugar, as a dessert either on its own or with jam or honey, or salted and peppered with herbs.

The petit suisse very common in the grocery stores here in Spain tastes light cheese and yogurt with fruit mixed in (usually strawberry) in small plastic containers of 50-60 gr.

Why Make Your Own Petit Suisse?

My husband is into healthy eating most of the time, but he like industrial desserts, too. He’s the one who started buying, natillas, petit suisse, and gelatin desserts and eventually, started letting our firstborn eat them when he was around 2 years old.

I told him that they’re not good, but he always has the same argument: they’re good because he has eaten them his entire childhood and nothing bad happens to him.

Though they don’t eat them very often (I am not a fan, I find them too sweet) and I haven’t taken a good look at their ingredients.

I have a feeling that they’re loaded with sugar because they’re very sweet (for my taste) that’s why I prefer them eating something healthier and homemade.

Update: I have already taken a look at the ingredients of the store-bought petit suisse and sugar is listed as the 2nd ingredient which means that petit suisse is indeed loaded with sugar (I learned years ago that ingredients are listed according to percentage of composition starting from the highest to lowest).

This is reason enough for me to really do my best to eliminate the store-bought petit suisse in our home and make sure that the homemade “petit suisse substitute” is available everytime my boys want it for dessert.

I just started watching videos on how to make homemade petit suisse lately. I thought that it’s difficult to make, but I was wrong because it’s very easy.

How I wish I have started doing it a long time ago, just like our homemade yogurt that I have been making since 2018.

I love to learn homemade versions of what we are buying from the store to regulate the ingredients better and to lessen the sugar content, just like our super easy homemade marmalade recipe which has way less sugar than store-bought.

Now that I already know how to make homemade petit suisse, I’ll make sure that we have a constant stock of them in the refrigerator, so the husband won’t be triggered to buy from the store anymore. 🙂

Another Reason For Making Homemade Desserts

Another reason why I want to make a homemade version of those mentioned desserts is that they come in plastic containers. 🙁 We are trying to lessen our plastic waste since 2018. We are slowly making progress, and still a LOT of changes to be done.

The next goal is to learn how to make homemade natillas and gelatin. I already tried to make natillas 2 weeks ago, but it was a fail. So, I need to try again.

Update: I finally succeed in making homemade natillas and we call them mamatillas at home.

The gelatin I already made one time 2 years ago. It was good and I have to try doing it again, soon. But natillas and petit suisse are the priority because these are the desserts that the boys liked the most. And also ice cream!

Making homemade petit suisse at home is super easy and for sure healthier than buying from the store, and also less plastic packaging.

Though making it at home seems time-consuming, but it’s not, especially when you already get the hang of it, it will be super fast.

I already memorized the ingredients and their respective quantities after doing it 4 times.

Do you make homemade desserts at home, too? If you do, please share them in the comment section below, so I can try making it, too.