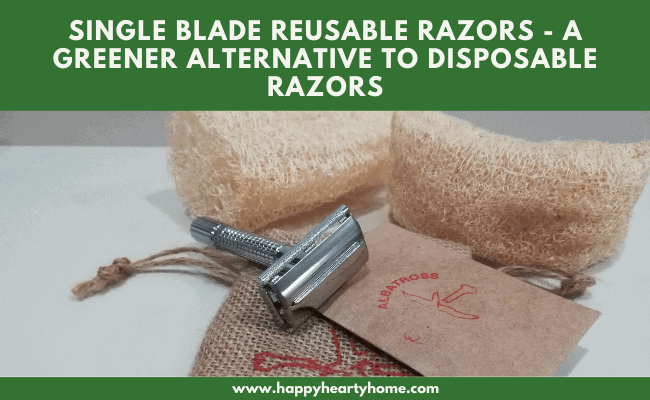 I bought my single blade reusable razor in November 2018 but started using it months later since I still had some disposable razors left. I used them up first before finally switching to the reusable razor.

This is one of the things I discovered as I dig deeper into the zero waste/ low waste movement. The women who were talking about washable menstrual pads and cloth diapers were also talking about reusable razors.

What’s The Problem With Disposable Razors?

The Environmental Protection Agency has estimated that 2 billion disposable razors are produced in America each year!

Disposable razors are used a few times and then thrown into the trash. They are hardly recyclables due to their small and sharp parts. Many recycling centers will not take them since more time and safety risks have to be invested to properly recycle them.

This means that many disposable razors ended up in the landfill or the ocean garbage patch every year, and the cycle likely repeated each year.

The waste problem brought by disposable razors has encouraged some companies to bring back the old-time shaving technique, which is the use of a single blade safety razor or a straight razor (looks like a small knife).

The safety razors and straight razors of the old times were made of heavy, sturdy metal (stainless steel, chrome-plated nickel, brass) or a mix of metal and wood. Thus, lasting a lifetime. The only wastes they produce are the single blades or double edge blades that have to be replaced after several uses which are easily recyclable.

Shaving back then was so simple. I can still remember my grandfathers and my father shaving just with
a single blade while holding a small mirror. And I saw my grandfather and my uncle once or twice shaving with a knife (their version of a straight razor).

My father’s shaving routine had an upgrade as he acquired a plastic safety razor (color yellow) where he can already insert the single blade when shaving.

But that’s about it. No special shaving cream whatsoever! Just normal soap that was rubbed thoroughly unto the face to create a huge lather to make shaving smooth and without cuts.

Civilized Health has a detailed article on the history of safety razors. As a summary, King Camp Gillette (a traveling salesman) combined a hoe-shaped razor (invented by someone else) with a double-edged blade in 1895. He made design revisions and marketed the new disposable razor in 1903 and made an empire out of it. What a history and a long-lasting empire! Most of my disposable razors in the past were Gillette! And the husband is forever loyal. 🙁 I haven’t convinced him yet to give safety razor a try, but I will keep on trying until he says yes.

But as I’ve read more about safety razors and other related articles, I’ve learned that a single blade razor is better than multiple blade razors because it cuts facial and body hair closely without creating more blade friction than necessary.

Only the blade of reusable razors has to be replaced once dull, but they are easily recyclable. A kit usually comes with a pack of blades. Mine came with a free pack of 10 blades.

3. Budget-friendly. Reusable razors last for a very long time. With proper care and maintenance, it might last a lifetime. Even if you’re going to spend a bit more in the beginning, but it will eventually save you money in the long run. And the replacement blades are very cheap, cheaper than buying disposable razors every time.

You only have to replace the blade once it gets dull and one blade goes a long way. So, a pack of 10 blades is going to last you a very long time! I am still on my 4th blade now and I started using in January 2019!

The reusable razor I have is entirely made of stainless steel and I really hope that I don’t have to buy another one in my lifetime.

I think most reusables, if not all, share the same benefits. They’re greener and healthier. A total win-win!

My maintenance routine for my reusable razor is very easy. After each use I disassemble the safety razor, remove the blade, and clean both under running water with an old toothbrush to remove hairs and soap. I then put them over a piece of cloth wipe in the sink and leave them to dry. After 2 hours or so, I dry them completely using the cloth wipe before putting them away for storage.

Sharpologist has detailed instructions on how to clean (basic and deep cleaning) and care for your reusable razor.

I have no regrets at all that I switched to reusable razor in early 2019. I am very happy and contented with the decision. Though there were several cuts, in the beginning, it’s normal, because most people who made the switch had the same experience. They call it the “learning curve”, but once you get the hang of it, shaving with a reusable razor is a breeze!

Are you already a reusable razor convert? If yes, what pushed you to make the switch? If not yet, do you want to give it a try?

If you are already planning to give it a try, my post about the best reusable razors for women will surely help you find the right reusable razor for you.