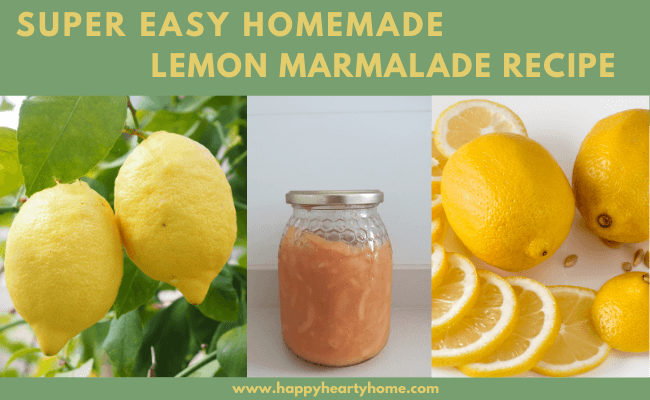 We haven’t bought marmalade or jam since February 2020 because we started making our own. Homemade is way better and healthier because we have full control over what ingredients to put and how much to use.

Our super easy lemon marmalade recipe is based on the recipe of Auntie Saniye, a great cook Youtuber from Turkey. I find her recipe the easiest to follow among so many videos that I watched.

But we made our own version of it by using our own raw honey, instead of sugar, and we don’t add water. 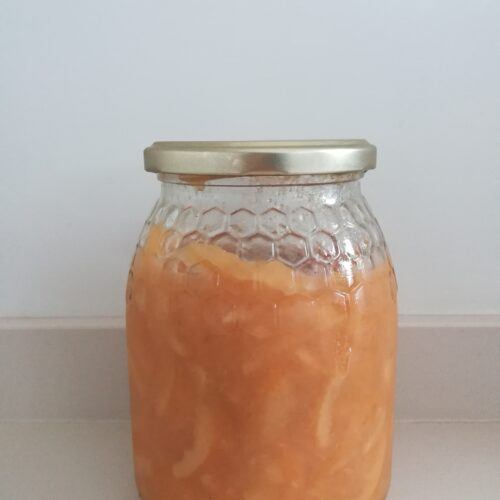 Julai
This is a super easy homemade lemon marmalade recipe with only 2 ingredients: LEMONS and HONEY!
Print Recipe Pin Recipe

1. Clean the lemons. 2. Peel the lemons. Cut the peels into thin slices (thickness and length depending on your preference). We cut our lemons approximately 1/2 to 1 cm thick and 3 cm long (1st and 2nd batch) and a mixture of small squares (because the husband was short on time in making the recent batch and was less concerned about uniformity) because we prefer a chunky texture. Weigh and put in a separate bowl. 3. Gather the meat of the lemons and also cut them into pieces, and remove the seeds. Avoid including the white parts, they give off a bitter taste. Weigh and put in a separate bowl. 4. Calculate the amount of honey needed, based on the total weight of the lemon peels and meat. We use 1 kilogram of honey for every 2 kilograms of lemons. For 4 kg. of lemons, use 2 kg. of honey. This is a 66.66% lemons and 33.33% sugar percentage. and in reality, even a lower sugar percentage since honey contains water. 5. Boil the lemon peels. Boil enough water in a pot and then put the lemon peels and let them simmer for 3-4 minutes. Strain and repeat the process 2 more times, this is done to remove the bitter taste from the peels. Update: You can skip boiling the lemon peels, especially when making a huge batch of lemon marmalade, to save on time. Just store the marmalade jars for 3-4 months before consuming them to get rid of the bitter taste.  6. Put the honey in a huge pot and put it on a low fire, to slowly liquefy the honey. Then the honey is already very liquid, pour the lemon peels and let it simmer for about 3-4 minutes. Then, add the lemon meat as well and cook together for another 20-30 minutes on medium fire. Keep stirring to avoid lemons sticking into the bottom of the pot. 7. The marmalade is finished when the consistency becomes sticky. But don’t overcook! Even if the consistency is not yet very sticky, it will be once cooled. 8. Transfer the marmalade to storing jars, put the lids on, and let them cool. If you only have 2-3 jars of lemon marmalade, you can just store them in the refrigerator. If you made a big batch, you have to water bath the jars for 15 minutes for safe storage.

1. Use organic lemons as much as possible since you will be using the peels. Non-organic ones are coated with wax. But if you can’t find organic lemons, make sure to clean and scrub the lemons thoroughly to remove the wax coating.

2. Make sure not to skip the step of boiling the lemon peels to remove the bitter taste. Our 3rd (recent) batch of easy homemade lemon marmalade was made by the husband in the garage to have access to a very huge pot and huge working area because we had about 20 kilos of lemon to turn into marmalade.

He didn’t boil the peels because he forgot and didn’t know that I did it with our 1st and 2nd batch. We tried it in the evening and to our dismay, it was very bitter. 🙁

We tried it again in the morning and it had the same bitter taste and he announced: we have to throw them! And I said “NO WAYYY” in a loud voice! We won’t be throwing 40 kilos of lemon marmalade to the drain!

TECHNIQUE TO AVOID THE BETTER TASTE WITHOUT BOILING THE LEMON PEELS.

My husband has already made 2 batches of our super easy lemon marmalade recipe homemade without boiling the peels anymore because he finds it very time consuming (the peeling and removing of seeds already take a lot of time!).

But he discovered a way to get rid of the bitter taste and that is to NOT consume the lemon marmalade right away. We store it for 3-4 months before finally eating them.

Now you have 2 options: Skip the boiling of peels if you are making a huge batch of lemon marmalade, but make sure to store them for 3-4 months before consuming them. Or boil the lemon peels of you are making a small batch, so you can consume the marmalade right away.

What’s The Difference Between Marmalade, Jam, and Jelly?

After making our 2nd batch of super easy homemade lemon marmalade, a thought suddenly came to mind. Why do we call it marmalade and not jam or jelly? So I made a bit of research to know the difference. And here’s a short explanation from masterclass.com:

Jam is made from whole or cut-up pieces of fruit with sugar, while jelly is made from only the fruit juice and sugar. Marmalade is preserves made with citrus—using the whole fruit, along with the rind.

Do You Need Pectin In Making Marmalade?

Pectin is a kind of starch and its main use is as a gelling agent, thickening agent, and stabilizer in food according to Wikipedia. Most jelly and jam recipes use pectin, but marmalade doesn’t need pectin because lemons and other citrus fruits are already high in pectin.

Why Make Your Own Marmalade, Jam, Or Jelly?

When I was still single in 2016, I started to eat healthier and read articles about healthy eating. I chanced upon an article on how to properly read food labels. It was very informative because it said that the ingredients on labels are written according to the percentage, highest to lowest.

Since then, I already have the habit of looking at food labels. And it’s shocking because there are a lot of store-bought things that the first one on the ingredients list is SUGAR! And this includes jams and marmalade. It means that the ingredient with the highest percentage is SUGAR compared to the other ingredients on the list.

If you take a look at a marmalade or jam label, some even say the percentage number. For example, 75% sugar, 25% strawberries. Imagine, you are eating more sugar than fruit and all along you think that you are eating a healthy jam or marmalade!

Making your own marmalade, jelly, or jam in the comfort of your home means that you can control the ingredients and the amount to use. You can definitely lower the sugar and increase the fruit for a healthier version.

Moreover, making homemade stuff is fun and very satisfying. It also helps in reducing plastic packaging and plastic waste at home. This is the main reason why I started to make homemade yogurt in 2018.

Try this super easy lemon homemade marmalade recipe in the comfort of your home for a healthier version of lemon marmalade.

But if you don’t have time, don’t worry, you can still buy a healthier version of your favorite marmalade or jam, just make sure to check the labels and buy the one that has a high fruit content than sugar.

Do you make your own marmalade or jam, too? If yes, what’s your favorite recipe? If not yet, would you like to try making one? Let me know in the comment section below.