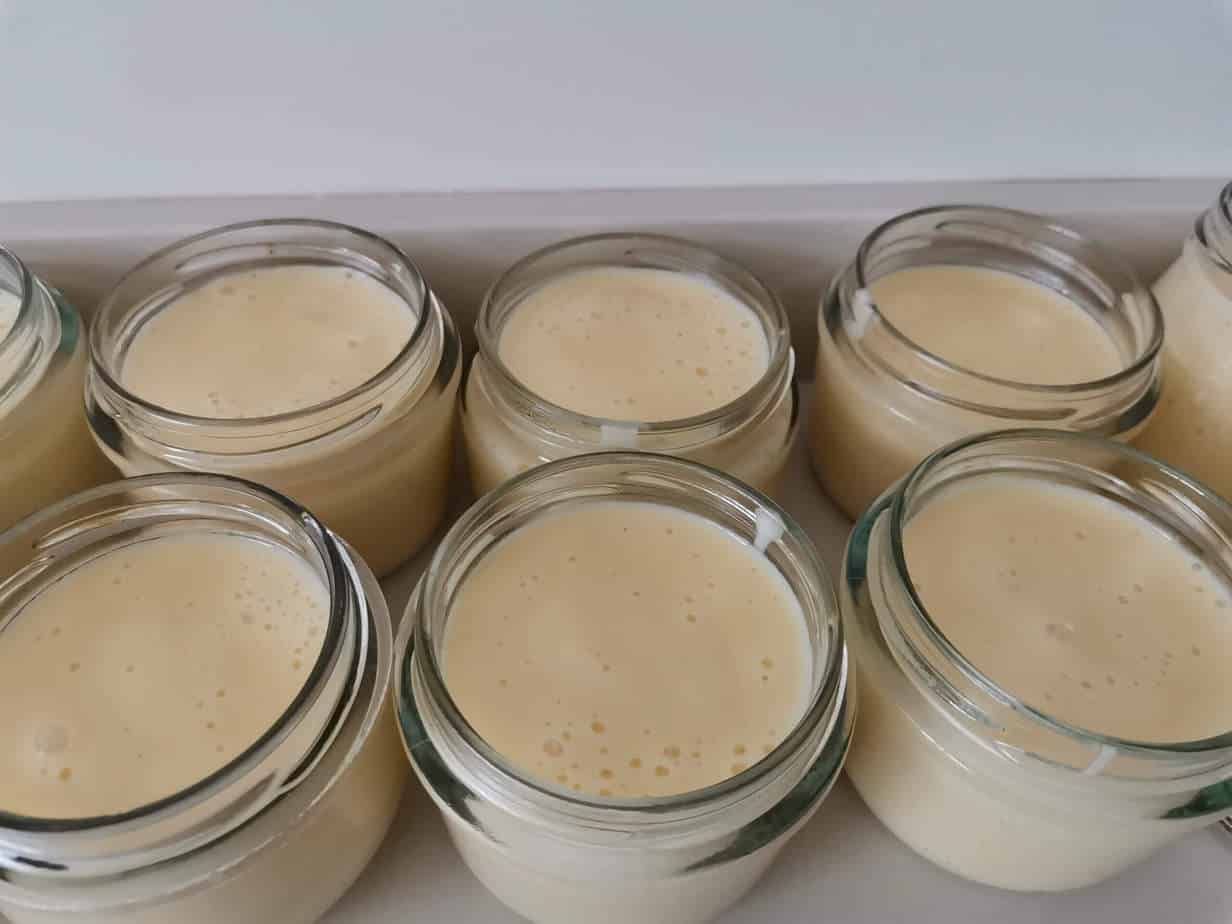 Today, I just want to share with you our homemade spanish custard dessert recipe, also commonly known as natillas here in Spain.

I started making it in March and made it 3 times now because it’s one of my boys’ favorite desserts, together with my homemade petit suisse.

This homemade spanish natillas is called “mamatillas” in our home. The husband has made a term for it, just like how he made “mama suisse“. 🙂

This homemade natillas recipe is based on the recipe of De La Olla A La Mesa (Spanish vlogger). I like that she uses the entire eggs instead of only using the yolks.

I made my own version of it by using our own raw honey instead of sugar, arrowroot instead of cornstarch, and omitting the vanilla. 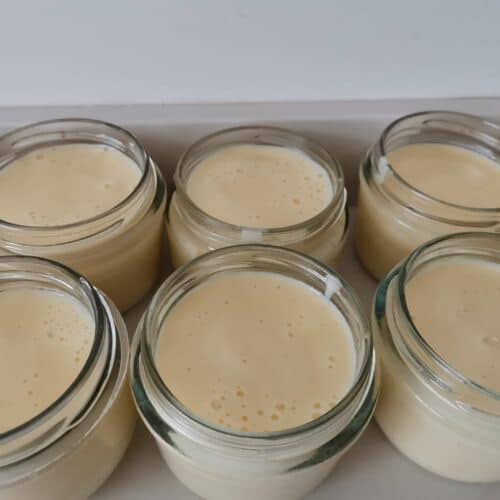 1. Reserve a glass of milk and put the rest of the milk in a pot together with the honey and mix well. Then add the lemon peels, cinnamon stick, and vanilla. 2. Heat the mixture in low fire. Stir it occasionally. 3. When the milk mixture is about to boil, switch off the fire. Remove the lemon peels and cinnamon stick and let it cool a bit for about 10 minutes. 4. Meanwhile, crack the 4 eggs in a bowl. Beat well. Then add the reserved glass of milk to the beaten eggs. Also, add 2 tbsp. of arrowroot powder and mix well with a whisk to make sure that the arrowroot powder is totally dissolved. 5.Add the egg mixture to the milk mixture and switch on the fire once again and put it on low. Keep stirring the mixture to make sure that it’s not sticking on the bottom of the pot. 6. Taste for desired sweetness. Add more honey if needed. 7. Keep on stirring until it’s about to boil, then it’s finished when it starts to be bubbly and the consistency becomes sticky. It’s between 5-6 minutes. Even if the consistency is not yet very thick, it will be once cooled. 8. Transfer the natillas to individual jars and leave them on the counter to cool down before transferring them to the refrigerator. They are best eaten the following day to make sure that the mixture has already solidified. 9. Sprinkle cinnamon powder on top before eating. A marie biscuit can also be added if desired. We eat our natillas without the biscuit, though.   ADDITIONAL NOTE: You can make it without vanilla extract. I added vanilla when I made it for the 1st time. I ran out of it on the 2nd time and it came out delicious, just like the first time. I will make it without vanilla from now on because the lesser the ingredients, the better for me.
Keyword homemade natillas, spanish custard dessert

What Is Spanish Custard Dessert Or Natillas?

Natillas (pronounced as natiyas) is one of the very common desserts here in Spain.

My husband grew up eating this dessert and up until now, he likes it very much. Eventually, he introduced it to our firstborn, and now it’s one of his favorite desserts, too.

According to Wikipedia, Natillas is a term in Spanish for a variety of custards and similar delicacies in the Spanish-speaking world.

In Spain, natillas is a custard dessert typically made with milk, sugar, vanilla, eggs, and cinnamon. It is prepared by gently boiling the milk and slowly stirring in the eggs (most often just the yolks) and other ingredients to create a sweet custard.

Wikipedia further states that Spanish custard dessert is also similar to flan but is typically richer, makes generous use of cinnamon flavoring and does not use caramel as flan normally does.

Approval From The Husband And The Kids

I just made this homemade natillas for the 3rd time yesterday (April 27) and this time I made it smoothly without any issues unlike the 1st and 2nd time.

I made it before lunch. The husband was already asking if they can have it for dessert. I said, not yet.

So they had it for dessert after dinner and the husband instantly said: hmmmm it’s delicious just like the ones from the store.

I asked him if he’s not going to buy natillas from the store anymore and his reply was: not anymore if you keep making it. 🙂

The kids were also happily eating there mamatillas.

What a joy! I left them enjoying their natillas to change my clothes with a smile of contentment and happiness that I was finally successful in making homemade natillas.

Simple pleasures are the best!

My Love For Making Homemade Desserts

Making homemade versions of store-bought things is something that I love doing at home. Only if I have a lot of time, I would love to make more homemade stuff.

But because chasing 2 small kids and running a household is already very time-consuming, so homemade desserts are the priority at the moment.

I make homemade desserts as much as possible for 2 major reasons:

1. To make a healthier version of the store-bought desserts my boys love.
Though we try to eat healthy most of the time, my husband likes store-bought desserts like natillas, petit suisse, and gelatin. He’s actually the one who introduced these things to #1, and now that #2 is eating solids, he is slowly introducing them to him, as well.

Everytime I tell my husband that the store-bought desserts he’s buying are not very good because they’re loaded with sugar, but his argument is always the same: they’re good because he has eaten them his entire life and nothing bad happened to him.

I don’t want to argue with my husband everytime we talk about these things, and I don’t want him and the kids to feel deprived of eating desserts, neither.

How did I know? Because I already made few homemade desserts that were a total fail! They were not delicious, so they end up in the garbage.:)

2. To lessen our plastic waste.

All the store-bought desserts that my boys like come in individual plastic containers. That’s a lot of plastic packaging, especially when my husband buys all 3 of them at the same time.

We have been trying to lessen our plastic waste since 2018. We are making small progress here and there, but still a LOT of changes to be done.

What homemade desserts are you making at home? Please feel free to share them in the comment section below, so I can try making them, too.

And If you’ll make this recipe at home, please let me know how it goes.