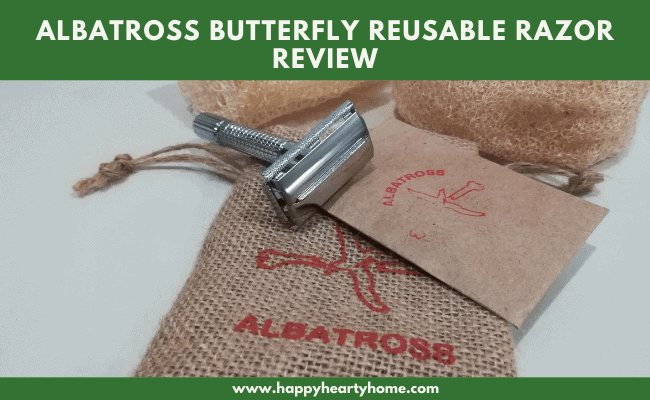 Today, I just want to share with you my personal experience with the Albatross Single Blade Reusable Razor. This is the reusable razor I bought in November 2018 to replace my disposable razors and I am still using it until now, January 2021.

This reusable razor is 9 cm long (the handle is 8 cm long and the head is 1 cm thick) and 4 cm wide. And is entirely made of stainless steel with a high-polished finish to protect the razor from corrosion.

Since this reusable razor is made entirely of stainless steel, it’s heavier compared to disposable razors. And this is a very good thing because it means that you don’t have to press hard for additional pressure during shaving while giving you a smooth shave.

The razor has a round handle with several grids that serves as anti-slip mechanism to make sure that the razor doesn’t escape from your hand while shaving.

The razor also has a short handle and I find this a good thing because I can hold the entire handle with my hand making it easier for me in directing the razor compared to a long-handled one.

The butterfly model is the most recommended model by Albatross Designs for most people due to its ease of use compared to the 3-piece model, a perfect choice for new reusable razor users like me.

If you take a look at my calculation, maybe you’ll think that 8€/year is not much of a savings. But a lot of people shave way more frequently that I am, so they consume more disposable razors and they use the more expensive models. So, it means really huge savings if they switch to reusable razors.

Eco-friendly / Long-lasting. The albatross butterfly reusable razor is very durable because it is made entirely of stainless steel. It means that with proper care and maintenance, it’s going to last for a very long time, maybe an entire lifetime. And it also means significantly reducing the amount of disposable razors being thrown to the landfill.

Well made. The manufacturer of Albatross reusable razors claimed that their razors have “high-polished finish to protect the razor from corrosion” and I find this statement true because I have forgotten to dry my razor up after using for many, many times! There were times that the razor stayed in the shower for about a month, constantly exposed to water everyday, but it is still rust-free until now.

Though the handle is similar to disposable, but there’s the feeling of “awkwardness” in using it. In my case, it’s due to the round handle since the disposables I was used to were of square handles. But there’s nothing to worry about because you’ll get used to it within the 2nd and 3rd shaves.

Several cuts in the beginning. Indeed, I have several cuts during the first 2 or 3 shaves. It’s because I pressed the razor harder into my skin just like the disposable ones. But I learned later that reusable razors don’t need additional pressure in shaving due to it’s heavier built.

I still get cuts once in a while, but it’s nothing compared to the ones I got in the beginning of my reusable razor journey.

I am very contented with my Albatross butterfly reusable razor and I don’t have regrets that I have chosen it among many other choices.

I bought my Albatross reusable razor from a local online store specializing in greener products, but unfortunately the store was already closed. But I checked online and found out that the razor is also available in many online stores. It’s not available in Amazon, though.

I will recommend it 100%, especially to those looking for reusable razor that is affordable, yet of very good quality. I am hoping that my Albatross reusable razor will last for a very longggg time, so I don’t have to buy another one in my entire lifetime.